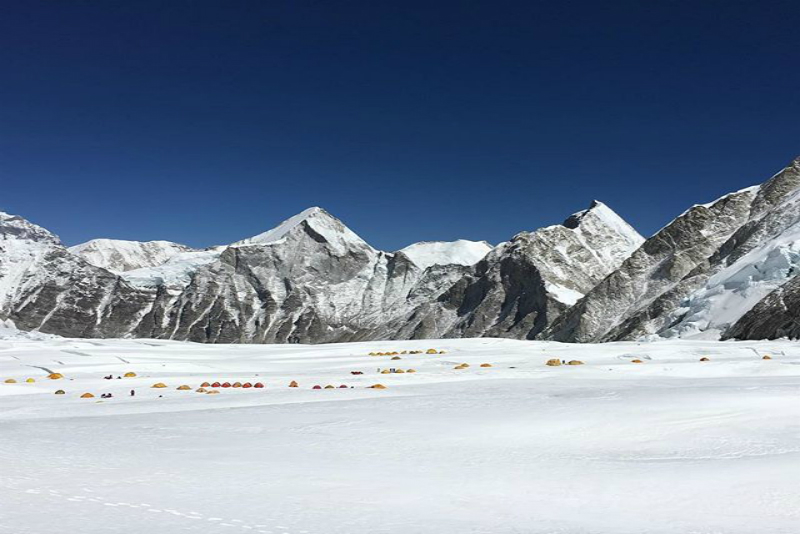 Picture this: it’s day fourteen of your Everest summit. Just about ready to start the climb, you’re at Base Camp. It is minus forty degrees most nights, and this morning it’s time for your team Puja. The local Lama comes around to bless you, your team, and your technical kit. There’s a ceremony, prayer flags are raised, the Lama chants, drums are beaten, and rice is thrown. The juniper is lit, sampa is smeared across your face. Then two capfuls of rum each. Beers are poured down the Lama’s throat. Then it’s time. You’re ready.

It’s day nine and she’s just arrived at Base Camp. It’s been a gentle hike from Lobuche. Stunning views mixed with the rare finding of fresh snow leopard footprints have made the trek well worth it, as Lucy and her team scaled Gorak Shep. From there it was an undulating two-hours to Base Camp, followed by a quick acquaintance with her new home for the next six weeks (her tent). As the team all sat down after dinner that evening, talk turned to Dorje’s thank you present from the team: a yak! The team insisted he be named Michael Yakson but… well, we’ll see.

Now it’s day fifteen, time for the ascent. It’s a two in the morning start, hot breakfast, final rucksack pack, and they’re off in near total darkness, scaling the notorious ice fall. The closest thing Lucy could compare it to was walking through a bowl of rice crispies. Snapping and crackling is fine… but you don’t want to hear a pop!

It was a few hours before Lucy and the team hit their first ladder crossing. Don’t look down, that’s the advice. But Lucy, of course, did, and was promptly greeted by a very dark, very deep abyss. Onwards from there just as the sun broke. Headlamps off, sunscreen on, the yellow tents of Camp 1 just over the horizon. But there they stay. And stay. And stay. You can see camp from a long way off before you even get close.

Day sixteen. Time for Camp 2 (6,400m) and a lot more ladder crossings. There is a rumour out there, that there are nine ladders tied horizontally together and strung across a giant divide. And Lucy’s here to tell you that it’s completely untrue – there’s just three! And after that it’s a slow, hot slog through the Western Cwm to Camp 2. But it was during the journey up to Camp 2 that Lucy and the team spied a small avalanche above Camp 1. Debris actually fell into the ice fall, blocking their path back. But with a new route Lucy and the team were quickly back at camp safe and sound.

Day seventeen: Down to Base Camp. Lucy managed to snap a few photos, and the ladders this time weren’t quite as terrifying, but the sudden lurches between divides has yet to follow suit. But once home: yummy food, clean clothes, and a watering can-esque shower! It’s really the small things when it comes Everest.

Today’s a rest day for Lucy. Kit needs to be sorted and packed for the team’s final rotation on the mountain. And tomorrow brings with it another trip to Camp 2 where the team will remain for a few nights. But Monopoly’s packed, plus a few extra chocolate bars. “Team Fatty” will be absolutely fine for the night.

For more updates from Lucy: https://www.instagram.com/p/BhQTVzUHwZP/?taken-by=lriversbulkeley

Or read about Lucy’s journey at: http://www.hanningrecruitment.com/news